If you’re an experienced runner, you know that there are many components that affect your performance. And, while you might be focused on your form, a lot of your running depends on how you place your feet. Foot strike has garnered a lot of attention as of late, and with good reason—this detail majorly impacts your runs. With the help of Aaptiv Master Running Coach Meghan Takacs, we’ve laid out all your foot strike need-to-knows, from different foot placements to how to optimize your own.

Then, try it yourself with a running class on the Aaptiv app.

All About Foot Strike

For beginners and those who are unaware, foot strike may sound like an odd boxing term. On the contrary, it’s actually a vital part of your run. “Foot strike is another word for foot placement, meaning the way in which your foot strikes the ground when you run,” Takacs explains. Every stride has some sort of mix of foot landing and rolling.

“It’s important to note that foot strike is all relative to your specific anatomy. In other words, I won’t have the same placement or gait as my friend, but that doesn’t mean that her[s] or mine is incorrect,” adds Takacs. “As long as the bulk of your foot placement in your strike is under your hips, your running form is good to go.” In other words, every runner has a slightly different running form (and therefore foot placement). This is highly reflective of your running technique, as well as footwear and terrain.

“Some people prefer to land heel to toe [known as heel striking], which is something I don’t teach, but again, that doesn’t make it wrong (as long as they land under their hips),” Takacs notes. In fact, almost all new runners heel strike and a bevy of elites doing it, as well. “Other people run with a mid-foot strike, meaning [that] their foot strike lands on the ball of their foot, and therefore their heel is not the first thing to land when they run,” she says. This is the form that you’ll hear many training professionals (and all Aaptiv trainers) teaching.

As stated, the two main types of foot strikes are heel strike and a mid-foot strike. Whether you do one or the other ultimately depends on what part of your foot lands first in your stride. Takacs explains, “Within these two strikes there is a more specific form. Either your foot lands pretty neutrally, meaning [that] your toe and heel are straightforward when you land, or you supinate or pronate.” Meaning, when your foot lands, it either rolls toward the outside of the foot (supinates) or rolls toward the inside (pronates). If you’re unaware of which of the three you’re doing, use Takacs’ method of checking your shoes. “Supinated folks will see wear and tear more on the outside of their shoe, whereas pronated people will see more wear and tear on the inside of their shoes. Flip over your shoes, and see which one you are,” she advises.

While heel strike is straightforward and used by the majority, mid-foot strike has a bit more to unpack. If you’ve ever heard a trainer say to run like you’re falling (that is, to lean forward and catch yourself with your foot, propelling yourself forward), they were likely teaching you mid-foot strike. More and more trainers are starting to teach this method, finding that it reduces impact and risk of injury, due to a softer landing.

“Mid-foot strike is when your foot strikes the ground, literally, mid-way. Think about when you get a pedicure and they shave the skin, with the little scrubber. Off the underside of your foot, right under your big toe, is where you want to land in your stride. It’s where you would be in pain when you wear heels,” Takacs describes.

For those of us who don’t get pedicures or wear heels, refer to the falling test. While standing, lean forward until you need to catch yourself with your foot. When you step forward to do so, you’re most likely to land with the middle of your foot. This is where mid-foot strike happens. “I like to think about my strike looking like how I would test the pool water, forefoot first. Then, by the time the bulk of my foot lands, it’s under my hips (I land directly under myself) and mid-foot. My heel barely grazes the ground,” Takacs clarifies.

How It Affects Your Running

There isn’t one foot strike that is better than the other (remember, it’s all relative). Even so, each style affects your running in a few ways. “I find mid-foot strike to be more effective when it comes to speed. However, it takes more power to implement,” says Takacs. Researchers think that this is because it requires more metabolic energy to generate the higher amount of muscle tension needed to perform. “This is why I coach cross training, lifting, and practice plyometrics and upper body strength to create power,” she adds.

Mid-foot striking also alleviates more overall impact when running. Takacs tells us that heel-to-toe striking is harder on your knees and shins, making you prone to over-striding. “This means, they land in front of their hips and then have to pull their entire bodyweight from behind them, forward. Mid-foot strike allows you to stay under your hips more effectively. It also helps to alleviate impact, since less body weight is in the stride,” she explains. It’s important to note that a shift from heel to mid-strike may reduce the impact on the knee (and therefore prevent knee pain and injury), but it also increases the potential for calf injuries. Stretching and strengthening these areas is paramount to running training.

Aaptiv can help you both stretch and strength train.

On the other hand, heel striking can benefit long distance running, since it’s likely the form of foot strike that you’re most used to. It’s also quicker for beginners to catch on to since it’s easier to learn and very reliable. This might explain why many marathon runners are recorded running with a heel strike. Just make sure that you’re taking care of your knees and avoiding over-striding.

How to Optimize Your Foot Strike

Now that we know the different styles of foot strike, let’s talk about how to improve our own. When it comes to conditioning your feet and generating more power, Takacs recommends plyometrics and ground pulling exercises. “Plyometrics, otherwise known as agility and conditioning movements, help to create power and improve mid-foot strike,” she mentions. “I also think [that] any motions where you pull from the ground, like deadlifts, help create more powerful triple extension; ankle, knee, and hip flexion. This makes your stride more powerful and efficient.”

Bettering your foot strike isn’t only about lower body. “I find training core and upper body also helps me keep my spine in line when I run, and helps me to land under my hips. Upper body strength is good for runners because it helps to improve posture and overall form,” Takacs notes. As for improving foot strike while you run, she says, “It’s important to know that you can create cleaner strike by increasing your knee drive. Bringing your legs higher off the ground when you run creates more of an efficient angle.”

We also recommend recording a video of yourself running. Slow it down and closely observe how your foot is landing on the ground or treadmill belt. The best way we can improve our performance is by knowing where to start and what we need to adjust.

To improve running form and foot strike, get started today with Aaptiv. 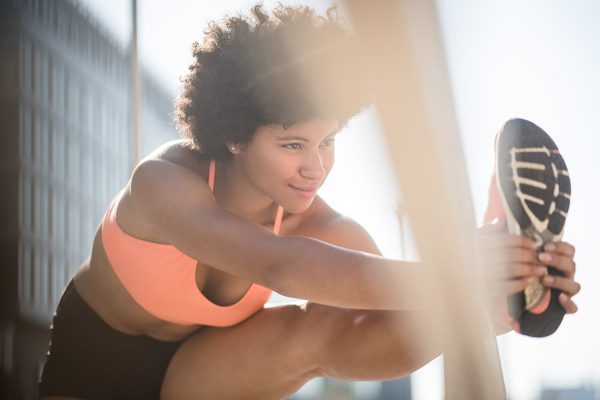 Regular exercise has been shown to reduce stress both in and outside of the office.

5 Benefits of Daily Meditation and How to Get Started

If you want to feel optimistic, focused, and rested, it’s time to start meditating a little bit every day. 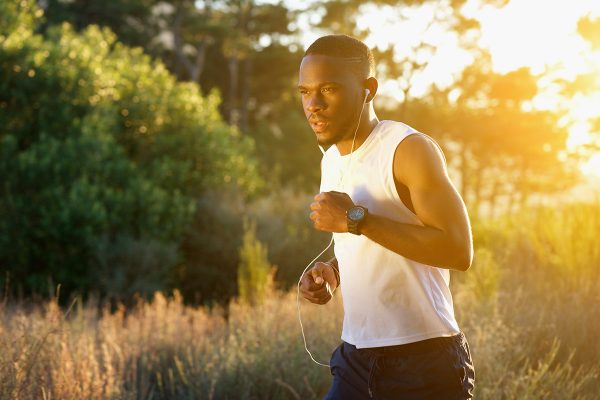 5 Outdoor Running Mistakes and How to Avoid Them

Avoid making these common errors when running outside.

How to Run in the Wind

Don’t let a stiff breeze keep you from running at your best.