What Athletes Should Know About IT Band Injuries

Use these expert strategies to relieve IT band pain or tension and prevent issues from happening in the first place.

A tight IT band, also known as iliotibial band syndrome, can wreak havoc on your workout routine. The strain leaves you with sharp hip or knee pain or the inability to exercise in the first place.

As one of the most common injuries for runners, it occurs when the band of connective tissue from your hip to your shin bone becomes irritated or inflamed.

Our experts answer three common questions about tight IT bands: what causes it, how to relieve tension, and if it can be prevented.

What causes a tight IT band?

“Generally, IT band problems are a symptom of dysfunction somewhere else,” explains Megan Graff, a certified strength and conditioning specialist, and doctor of physical therapy in California.

“Usually, hip weakness contributes to faulty movement patterns, and over time, that can cause the IT band to feel tight. Really the issue may be repetitive stress into a movement that’s less efficient. For example, a very common thing I see is the knee falling inward toward the other knee (think knock-knees) when someone is squatting, climbing or descending stairs, walking, or getting in and out of a chair. This puts a lot of stress on the IT band and can make it feel painful or tight. But again, it’s just a symptom of a problem elsewhere.”

“Generally, IT band problems are a symptom of dysfunction somewhere else.”

The IT band is a thick band of connective tissue near your hips, and it runs along the outer part of your leg until attaching to the outside of your knee.

Since your IT band isn’t technically a muscle, it doesn’t contract, which means it won’t lengthen, stretch, or shorten. Instead, other muscles like your glutes, outer hips, and outer quads serve as a push-pull to the IT band; if those muscles become tight, it creates a tense or painful sensation.

Don’t stop working out while you rehab, click here to see other workouts you can do.

“The IT band originates from the Tensor Fasciae Latae (TFL) muscle and the gluteus maximus, so these can be two sources [that] refer pain down through the IT band,” says Patrick Suarez, a doctor of physical therapy in Arlington, Virginia.

“Making sure [that] you are keeping this muscle not only mobile by stretching and rolling but strong, as well, will help reduce your chances of pain in the IT band. The IT band also ends at your tibia, just outside the knee, so proper joint mobility at not only the knee but [also] the kneecap, can help. It is important to think about where the source of that pain or tightness might be coming from.”

An increase in running mileage, or an extra-long intense workout, can cause pain and swelling associated with iliotibial band syndrome.

Usually, though, the culprit involves muscle imbalances, weakness, and a loss of flexibility in the hip flexors, hips abductors, internal rotators, and both gluteus maximus and medius.

Your IT band is intended to strengthen your knee, so when the surrounding or supporting muscles are tight, it forces your body to compensate—resulting in friction and compression on your knee area.

Check out these workout samples from Aaptiv. You’ll love them.

Can I fix a tight IT band?

“As with anything, relieving a tight IT band depends on what is causing the tightness,” says Vivian Eisenstadt, owner and chief physical therapist of Vivie Therapy in Los Angeles.

In her opinion, it’s usually related to one of two things: pelvis misalignment or foot pronation. The former happens when one side of your pelvis is rotated, which requires better hip alignment to make sure pelvis muscles function properly; the latter involves being “flat-footed,” which causes knees to buckle inward.

Going to a physical therapist or chiropractor can help with both, along with doing exercises to strengthen and support the arch of your foot.

Physical Therapist Lauren Lobert has a lot of experience in treating patients with IT band tightness and pain, based on her work as founder of APEX Physical Therapy. She sticks to four pieces of advice:

Eisenstadt also recommends a number of methods to release tightness such as deep tissue massage and standing side stretches with crossed legs. Here’s one specific exercise, per Eisenstadt, that you can try at home:

As mentioned above, using a foam roller is another popular way to address IT band pain, according to Suarez and Graff. “The most common way to relieve a tight IT band [is] to use a foam roller along the outside of the thigh and roll your IT band, or perform stretching that includes bending pretty far to one side while trying to keep your leg grounded,” says Suarez.

“But, most people overlook where the IT band originates and where it ends, and these points can be critical to relieving discomfort and pain in the IT band.”

Graff suggests spending a little time with the foam roller on a specific, tender spot—even though that’s probably the last thing you want to do—and focus on taking deep breaths.

“Many times, when people just roll around [on a foam roller], they’re tense because they’re holding themselves up, but they also hold their breath, which just feeds into the part of our nervous system that is contributing to that tension,” she notes.

Aaptiv has stretching programs that will help your IT band feel better. See a sample stretching class here.

Is a tight IT band preventable?

The best way to avoid a tight IT band is to continually strengthen your hips and glutes, stretch to keep muscles flexible and use a foam roller, when possible. Try to stay active versus sitting all day and be mindful of overexercising.

You can also ice your IT band to reduce inflammation during an episode, or switch to low-impact activities and give your body a break. However, these suggestions don’t always lead to a complete fix, so, if your pain persists, you may also want to talk to your doctor about additional treatment.

“It’s very valuable to go in and see someone and have them look at the way you move to see if that could be why things are feeling tight,” says Graff. “Otherwise, using a foam roller may only give temporary relief, because you’re just addressing a symptom and not the root of the problem.”

Ready to get started with Aaptiv workouts? View some of our sample workouts and classes here. 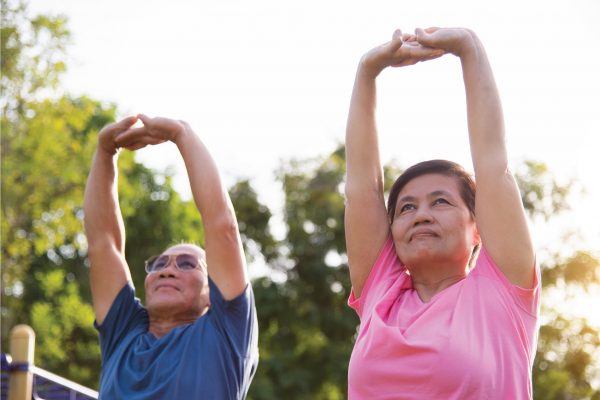 The Best Exercises for Seniors to Improve Coordination

Exercise your way to better balance.

Learn how working out can impact your brain health.

Here’s What Your Energy Slump Is Trying to Tell You

The time you feel drained says something about your health.