How to Prevent Shin Splints and Other Shin Pain

Identifying and treating the varied causes of shin pain is more complicated than it seems.

Shin splints are one of the most ubiquitous running-related annoyances. Medial tibial stress syndrome, as the condition is formally called, has incidence rates as high as one in three among people who recently increased their activity level. Pinpointing and treating the source of the shin pain, however, isn’t straightforward. “‘Shin splints’ is not a specific diagnosis, it’s a symptom,” says Lynn Millar, PhD, PT, referencing the British Medical Journal. With Millar’s expertise to guide us, let’s break down the potential causes of tibial pain to find out how you can identify and work to prevent shin splints.

Stretching with an Aaptiv class before your workout is a great to prevent and treat shin splints.

What are shin splints?

Medial tibial stress syndrome simply means that there’s pain derived from inflammation of the muscles and tissues surrounding the medial (inside) area the shin. However, not all shin pain is MTSS. “The big thing is that there are two compartments that attach to the shin through the fascial layer. You can actually have inflammation or compression in one of those two compartments of muscles,” Millar says. “If it’s a flow problem, it may be that the tissue doesn’t expand enough during activity.”

Likewise, the attachment to the shin bone itself can become inflamed. “It can actually start to pull away, not like a muscle tear. But when it happens often the shin itself starts to hurt as the tissue on the shin becomes inflamed,” Millar informs.

The problem with the umbrella term “shin splints” is that the related symptoms overlap with more serious injuries. The inability of tissue to expand within a compartment could also be compartment syndrome, a condition that can require surgery, in some cases. “The other thing is [that] you can start having problems with the bone,” Millar says. “You can have microfractures with the bone itself and you may think [that] it’s just shin splints. But if left unidentified, it can worsen and become a stress fracture.”

It’s impossible to say what’s causing shin splints if you don’t have a more specific diagnosis of what’s going on inside your leg. But most commonly, it’s either an overuse or a biomechanical issue. “The risk factors are definitely in overuse, either in improper progression, ramping up way too fast, and[/or] going to something highly intense,” Millar says. “It could also be that, as they progress, they start altering their biomechanics—how the person is landing when running.”

Because the potential causes of shin pain include easy fixes (like changing out a set of worn shoes) and months-long issues (like compartment syndrome and stress fractures), your best move is to see a PT or orthopedic surgeon who specializes in running. If it’s a biomechanical issue, you’ll get a personalized strengthening and stretch routine to remedy it. If not, you’ll get therapy options with which to experiment until you find something that works for you.

Acknowledging the problem and working on it, though, is key to longevity as an active person. “I’ll go back to my personal experience. Once a person has them, they tend to recur, unless they did thorough retraining to change their biomechanics and musculature,” Millar says.

Shin splint treatment interventions are numerous, but before trying one out, conduct your own personal Hippocratic oath. “If you’re going to try some sort of treatment, make sure [that] it’s something that can’t hurt you,” Millar says. “Anytime you’re reading something online, what you want to be thinking is, ‘Am I seeing this in the literature?’ If not, it could potentially hurt me.” These are Millar’s top recommendations for treating shin pain.

Because shin splints commonly derive from overuse, taking a few days or a week off of running to allow swelling and inflammation to go down is a great starting point. “Most of the time, it’s going to take some rest and backing off, then progressively increasing back up,” Millar says.

“Some studies have looked at the use of compression clothing. For some people, it appears to be helpful,” Millar says. A properly fitting compression sock or sleeve could help reduce the swelling.

Rather than strengthening the specific muscles involved in shin pain, you’re really stretching the muscles that support your stride. One-legged squats for glute strength, calf raises for the lower legs, and single-leg balancing are great practices to kick shin pain and improve your running form simultaneously.

If you’ve just finished a run with shin pain, try pushing up against a wall with straight or slightly bent legs to stretch the lower leg muscles and increase ankle mobility.

The anti-inflammation technique of submerging your lower legs into an ice bath, or alternating between warm and cold water for a contrast bath, is under scientific scrutiny. Although, anecdotally, world-class athletes still swear by them. As Millar says, if it makes your leg feel better, go for it.

Non-steroidal anti-inflammatory drugs, or NSAIDs, can help with lower leg inflammation and reduce the pain of shin splints. They aren’t, however, a good permanent solution. “NSAIDs in the long term are bad for the gastrointestinal system,” Millar says. “That’s why we try to find other therapies that get us away from using NSAIDS. After short-term use, get off [of] them and start using other types of treatment.” 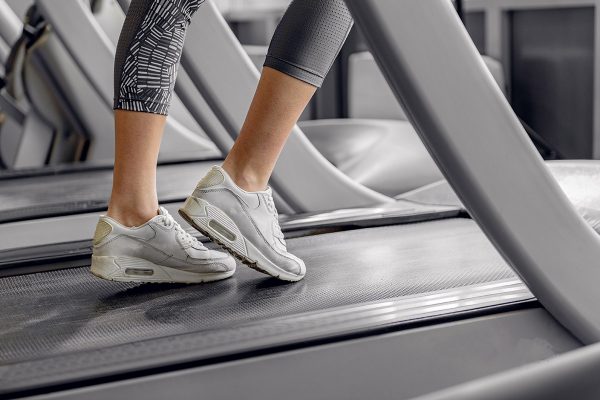 Stair Climber vs. Incline Walking: Which is Better?

Both workouts seem to do the same thing, but is one better than the other?

Collect them now in the app

Can’t touch behind your back? Time to get flexible.