Heard, Not Seen: Peeling Back the Mask With Rapper Leikeli47

"You’ll never be able to pin me, my sound, or my style down."

Leikeli47 is opening up. Well, sort of. The Bed Stuy-bred rapper isn’t shedding her famous balaclava-style bandana masks anytime soon, but with her second album Acrylic, she’s gradually pulling back the veil on her once hermetically-sealed life. And that’s exactly how she wants it.

“The mask dates back to my mixtape days,” Leikeli tells Aaptiv. “I’ve always been a shy, low-key person so the privacy is important to me and for my movement. It keeps it fun and also keeps the focus all on the art.” So far for Leikeli, that art includes several projects, including her 2012 self-produced mixtape LK-47, 2014’s LK-47 Pt. II, 2015’s Leikeli47, and, of course, her 2016 debut LP Wash & Set, which offered the first deeper glimpses into the reticent rapper’s life story. In the meantime, her fan base has grown and added notable figures, such as Diplo, Issa Rae, Skrillex, Missy Elliott, and JAY-Z. The last of which named his 2016 TIDAL summer playlist after Leikeli’s anthem “F**k The Summer Up.”

That kind of attention might make another up-and-coming artist feel some type of self-indulgent way. But that’s not Leikeli. After all, this is the girl who once called certainly accurate comparisons of herself to Missy “blasphemous.” “There’s never going to be another Missy,” she told Vibe. “But I’m not mad that’s the company that I sit in because she’s the greatest.”

No, she’s not in it for the glory. She’s in it because she’s not someone who hopes for things to happen—she makes them happen. “My goal is to be number one,” she says. “But that doesn’t necessarily mean number one on the charts—it’s a mental thing. I want to be the number one me I can be, the number one in life. That’s the whole point of all of this. So I’ll continue to chop wood and carry water until I’m there.”

If her music and work ethic don’t convince you that Leikeli will get that number one—on the charts and in her mind—talking to her will. When she joins the phone call set up for our interview, her presence immediately emanates through the receiver. If there’s anywhere in the world she’d rather be than on this call, you wouldn’t know it. She’s irrepressibly warm and overtly positive. By the end of the talk, it’s like we’ve taken a shot of espresso … or something stronger. And suddenly, we’re all rooting for Leikeli47.

Read on to learn more about Acrylic, Leikeli’s creative process, and how exactly she plans to get her number one.

Let’s talk about the masks. How many would you guess you own?

“I have bags. Right now I’m in Miami and I actually have to travel back to a place where a lot of my masks are now, and I’m just thinking about the bags that I have to go through for another trip that I have coming up. But it’s bags on bags.”

Your new album is called Acrylic, a name that’s equal parts feminine and tough. What’s the meaning behind that?

“Growing up in Brooklyn, there were a lot of fun moments. There were also a lot of life lessons learned. I just wanted to challenge it and put into the album and into my music. There were moments growing up there that I discovered how to make sounds on my street, sounds on my window panes. It was just a fun experience. Brooklyn is a beautiful place. I have a song on the album called “Hoyt and Schermerhorn” because that was one of my favorite stopes because it always reminded me of Michael Jackson. You know he had done so much work at that station like shooting the video for “Bad.” It was just a cool place to live and be.”

Speaking of MJ, who are some of the people in the industry that you really look up to?

“Stevie Wonder, Prince, D’Angelo, JAY-Z, Diana Ross, Outkast, Bobby McFerrin—just all the greats. People that had flair. People that really just went and did things their own way and never skipped steps. They never took the easy way, they always took the right way. They influence a lot of my sound. Coming up, I had those artists on repeat. It’s all about good music and great artists.”

All of those artists are or were genre-bending and willing to really experiment with their sound.

“That’s what it’s all about. I never grew up blasting one kind of music. You have rock, alternative rock, soft rock, hip-hop, grunge, whatever it is. But for me, it’s all just one sound. It’s all just beautiful music. I was focused on the artists and the way they did things. They were all so different but they also always looked like me. I could relate to them in that way. That’s what it was all about for me.”

Can you talk a bit about your creative process?

“For me, it’s all about selling out the moment right then and there. Sometimes the lyrics come first, sometimes it’s the melody, sometimes the beat comes first. That’s the cool part about creating. I know, for me, I can’t go in with a set process. I just go in. That’s my process. I don’t think about it. We all poke holes afterward but leading up to that point, that’s never a thought. I just have to go.”

You can’t overthink it.

“Yeah. Once you overthink it, it’s too much. It’s like getting dressed. It’s like personal style. You get up and dress according to how you feel that day. Maybe you’re feeling all black, maybe you want a pop of color, maybe you want to look like the sun one day. That’s pretty much how I am and who I am. You’ll never be able to pin me, my sound, or my style down. I’m all over the place.”

How do you get amped up before a performance?

“I’m a naturally shy person and I can be really, really quiet. I can’t lie: I get nervous. But once someone passes off the mic and you’re about to take that first step on to the stage, you just have to go. You just have to jump in and you can’t think about it. When I’m up there, I don’t really know what happens. I see the people and, if I can be real, whatever nervousness I was feeling goes away because it’s all about them. It’s all about the people who purchased a ticket last week, the people who purchased a ticket at the door, the person who brought their friends and said ‘Yo, I like this artist, you should, too.’ It’s all about the people. I leave it all on the stage no matter where I am. I even do that in soundchecks, too.”

“Being number one. I’m going to speak it into existence. I want to be number one—not in a vain way. I just want to show kids and show everyone that you can follow your dreams, you can be different, you can be quirky, and you can get to the top. You can sit right up there with your heroes and your peers. My goal for next year is to always work extremely hard to be that number one. I want to see grandmothers in masks with their grandkids.”

“I want everyone to see themselves in that mask. The mask represents freedom, it represents humanity, it represents love, art, being yourself. That’s my goal. That’s the whole point.”

So, what you’re saying is you have no plans to slow down anytime soon?

“That’s right. I always follow my gut relentlessly and work like crazy. Another influence of mine is Sean Combs, Puff Daddy, Diddy—whatever you want to call him. That man right there, I want to be that. I’m that girl and, when you say I can’t do it, I’m going to jump on the table and say I will do it. That’s just the way I live. That’s just the way I go at it.”

For more information on health and fitness, consult Aaptiv—it’s got you covered. 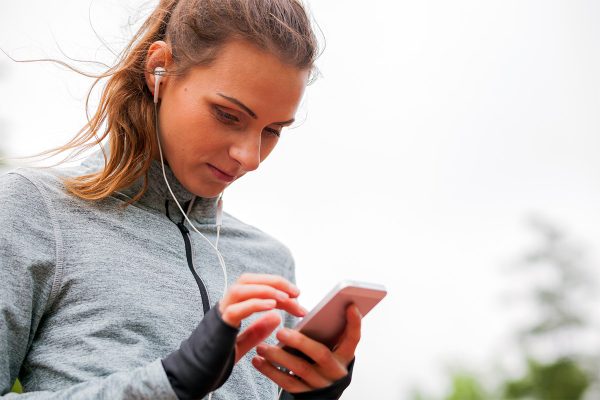 Here’s how listening to your favorite tunes during a workout can improve your performance, speed, pace, and more.

Here’s How Different Genres of Music Impact Your Workouts

Music can help you exercise harder, better, faster, and stronger.