Electrical Muscle Stimulation Workouts: Can You Shock Your Way to Gains?

One trainer was shocked at the effectiveness of this trendy workout.

Remember that time you sprained your ankle or strained a leg muscle, went to physical therapy and had electrical muscle stimulation (EMS) applied to it for recovery purposes?

Fitness professionals are taking this concept to the next level by incorporating whole body EMS into personal training and group fitness settings. Whole body EMS requires the participant to wear a suit that is loaded with electrodes that shock several areas of the body simultaneously.

Thankfully, the EMS professional is able to increase and decrease the intensity for certain muscle groups. Aaptiv has several bodyweight workouts that you can do anywhere, but imagine if you did them while being shocked by electricity?

Before we get into the growing research behind whole body EMS, let’s explore what it was like to try this intense workout first-hand at Shock Therapy Fitness in New York City.

I arrive to Shock Therapy Fitness and am greeted at the front desk by Husein Ural, CSCS, CPT, and Vice President of Training and Technology of Shock Therapy Fitness. I fill out my liability waiver and am asked to change my shirt and pants into a branded compression shirt and capris. Once I finish changing, a staff member starts securing a full body suit around me, which has to be a little wet to properly conduct the electricity. Once locked into the electrode-laden suit, I am ready to start the small group fitness class. I start conversation with the other class participants as I wait to be shocked.

Once we enter the room, there are six stations, one for each class member. There are a few hand weights and other tools around, but this studio mainly focuses on bodyweight training with electricity. I grabbed 2.5 pound weights even though there were heavier ones available because I knew that the shocks were all the resistance I needed (and I was correct). Here’s how the stimulation starts:

Alain, today’s trainer, asks each of us individually if we feel the shock in each of our body parts.

Alain: “Mark, we’re going to do your quads.” *shock starts*

This question and response goes on for the traps, middle back, lower back, glutes, abs, chest, biceps, and triceps. All five people in class receive this same line of questioning and adjusting until everyone feels shocked to their preferred level of intensity.

A holographic avatar projected on a giant screen serves as a complimentary instructor to Alain, because Alain’s role is to adjust each person’s intensity as they ask for it during the entire workout. I ask Alain for three to four frequency adjustments in 30 minutes, as does everyone else. After a few minutes I ask Alain to remove the abs shock completely. It is a strange feeling for me—like I’m waiting for an ab cramp to happen. Then I ask him to turn the abs electrode back on once I feel like I can handle it. I ask Alain to completely remove the chest shock—I can’t tell if it was my pectoralis major or my heart that was pulsed with the electricity. I ask for more intensity on the traps, quads, and glutes!

My breathing pattern immediately defaults to my yoga breathing pattern, which is deep, focused breathing. I keep this deep, loud breathing throughout the workout. Some other people in the workout have the intensity seriously cranked up—they keep asking for more! I am good with one intensity increase on the legs. The best strategy to get the most out of this 30 minutes is to voluntarily contract during the entire ten seconds of involuntary (EMS) contraction. The shocking “tempo” was ten seconds on, one second off. Overall, I would definitely try this type of workout again, especially their other class called Metabolism.

Whole body EMS is very popular in Europe—the majority of studies, suit manufacturers, and studios are European. (Although, there was Journal of Exercise Rehabilitation study in 2018 that was conducted by Korean researchers.) Visionbody, based in Germany, sells at-home, whole-body EMS suits. In New York, Shock Therapy is the only small group fitness whole body EMS concept, although there are other one-on-one personal training EMS studios like E-Pulse. When looking at the research, it’s important to compare whole body EMS (WB-EMS) during strength training exercises to strength training exercises performed alone. It’s also important to look at what frequency is being used. Shock Therapy’s Strength classes used 80 hertz as the default setting.

A 2016 Evidence Based Complementary and Alternative Medicine study had people do either high intensity resistance training (HIT-RT) for two sessions per week or WB-EMS for three sessions every two weeks for 16 weeks. The HIT-RT included moves like bench presses, seated rows, lat pulldowns, and leg presses using techniques like drop sets and supersets. The WB-EMS contained six dynamic bodyweight movements, including squat and deadlift variations, at a frequency of 85 hertz. The results were similar in terms of body composition and strength.

“In general WB-EMS is slightly less effective for improving muscle mass, body fat (including abdominal body fat), and dynamic strength (albeit not isometric strength) compared with HIT-RT,” says study author Wolfgang Kemmler, professor of exercise physiology at Friedrich-Alexander University in Germany. “On the other hand, WB-EMS is less time consuming than HIT-RT. We would like to conclude that WB-EMS is more an option for people unwilling, unmotivated, or unable (e.g. due to physical limitations) to conduct the strenuous HIT-RT protocols.”

Kemmler adds that the WB-EMS group spent 37 minutes less on working out per week, not including the travel time for the extra weightlifting sessions. Kemmler’s vision for WB-EMS is the route of personal training. “With respect to cost, WB-EMS should be considered as a kind of personal training,” says Kemmler. “This aspect is related to the rather sophisticated regulation of the exercise intensity that is based on a close interaction between client and instructor to generate adequate impulse intensity. Thus, it is inevitable that WB-EMS is a relatively expensive method. We do not support the strategy of a zero or only slightly supervised WB-EMS training with e.g. ten devices, a flat screen applying the movements, and (if at all) one instructor for all ten people—this is not the nature of proper WB-EMS application, at least according to our scientific experience.”

Shock Therapy doesn’t have ten devices going at once, but they have a maximum of six. Each suit has 18 electrodes, ten for upper body, six for lower body, and two for the arms.

“We are able to target more than 300 muscles, and right now in the system we are able to see and adjust the intensity levels of the shock to every muscle,” says Ural. “In about one month, we are going to be able to show people calories burned, heart rate, intensity level, and more via a projected screen like [the one at] Orange Theory Fitness. There will be a heart rate monitor in the forearm part of the suit reading this information.”

The frequency in the strength class is 80 hertz, meaning that there are 80 involuntary contractions per second. Ural explains that. therefore, one rep of a biceps curl during EMS equals 80 contractions in the biceps muscle, which can be intensified if you really flex with the stimulation. During a normal curl, the brain sends a signal through a nerve to contract the biceps, then the biceps contracts in one second if you’re using a normal tempo.

“You don’t feel 80 contractions pulsing, just one long contraction,” says Ural. “We are able to reach 50,000 contractions per muscle group in 30 minutes, which is why we are claiming that a 30-minute Shock Therapy Fitness class equals three hours of regular strength training.”

If we’re talking strict calorie burn, a 2012 Journal of Strength and Conditioning Research study found that WB-EMS burned about 60 more calories compared to a 16-minute low intensity resistance training workout. The theme with the studies on performance or energy expenditure is time-saving—no EMS studies contain workouts longer than 20-30 minutes.

Although the U.S. hasn’t produced at-home, wireless WB-EMS suits yet, Ural says it’s on the way.

“I know some companies in the U.S. are trying to create a system like Peloton where the consumer can purchase the device and do the training on demand,” says Ural. “We are the pioneer of EMS right now because we created the first group fitness concept. The goal is educating the consumer, keeping our clients excited, and tracking the metrics of all workouts.”

According to Ural, the first fitness studio with EMS opened in 2007, and there are 10,000 EMS studios in the world, 2,000 of which are in Germany. Ural, who is of Turkish descent, knows his EMS and claims that he was operating 30 different EMS studios at one point and currently is the Master Trainer of three different manufacturers.

“I create all the programming here,” Ural says. “I choose the best proven bodyweight exercises like squat, lunge, bent over rows, etc. We are not doing so much spine flexion because people in NYC are working in the office all the time. They don’t have strong posture because of the nine to ten hours sitting in front of a computer. [During] every second of the workout, the postural muscles, like the erector spinae and traps, are working, since they’re being stimulated.”

Indeed, a Shock Therapy workout works the agonist, antagonist, stabilizer, and synergist muscles all at the same time without any pressure on the joints—it’s zero impact. As for recovery from the workout itself, Ural suggests waiting a few hours to do a full body stretch because there is too much tone (excitement of the muscles) happening in the minutes right after class.

So, does electricity during a workout hurt?

I wouldn’t call it pain. It’s more like a mental…shock. After the first few minutes, you start to get in the groove and embrace the shocks. It’s worth noting that there is an element of human error. Like, what if Alain somehow was unable to decrease our shocks when we wanted him to?

Based on my experience, I think future whole body EMS studios (and probably Shock Therapy) may want to consider removing the chest shocks since that seems like more risk than reward. I agree with Kemmler in the notion that EMS is not for large group fitness studios at your local Crunch Fitness or Equinox. Whole body EMS should be for personal training or small group fitness in a boutique setting. At-home units would come with a big risk since the average American may not know what EMS is in a physical therapy setting, never mind a fitness one.

Yes, I especially found the squat jump movement useful. I tried to jump in conjunction with the start of the shock to essentially re-educate the fast-twitch muscle fibers in my legs to jump higher and with more power. In its current state, EMS is a mind and body experience that requires an open mind and some solid nerves.

Check out all the other intense fitness workouts you can do with Aaptiv. Just download the app to get started! 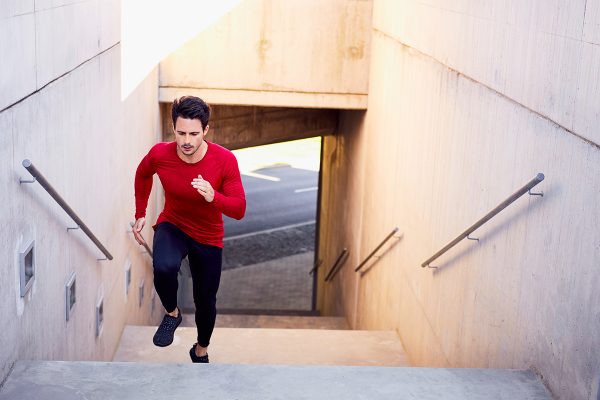 HIIT Vs Cardio: Benefits Of Each For Fat Loss

When it comes to developing a fitness routine, they are both important. 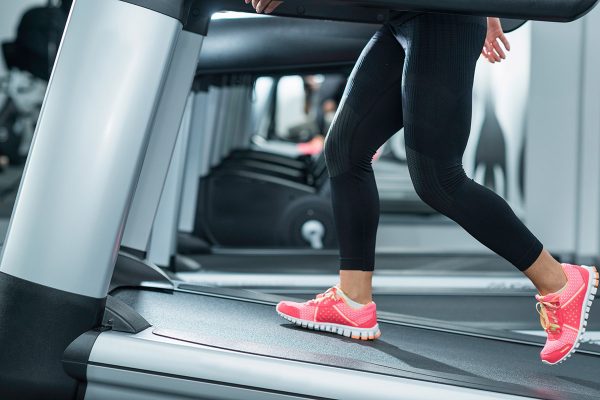 6 Ways to Burn More Calories on the Treadmill

Don’t dread the tread—try these moves instead. 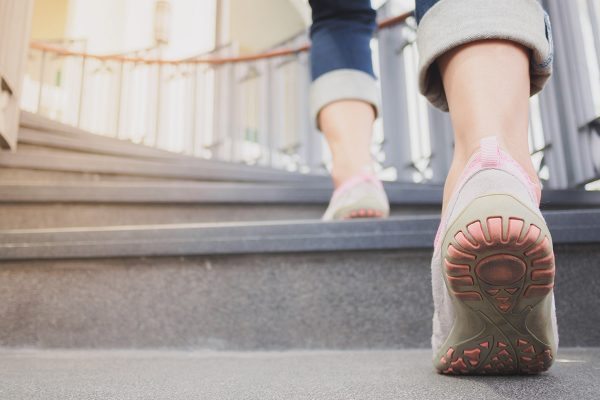 Squeeze in just a few minutes of daily movement and you could torch an extra 100 calories.